Pacquiao pulled out of the lucrative contest, which was scheduled for 13 March, after Mayweather demanded random drugs tests ahead of the bout.

With potential purses of up to £25m per fighter, former judge Daniel Weinstein, who has helped resolve previous spats between the pair, has been brought in.

The duo have agreed all points of the contract apart from the drug testing.

Mayweather and Pacquiao are both happy to take unlimited urine tests but Pacquiao will submit to blood testing only on specific dates.

Last week he responded to claims that he had been using performance-enhancing substances by issuing a lawsuit against Mayweather, Mayweather’s father and uncle as well as Golden Boy Promotions.

Mayweather’s team attempted to diffuse the situation by issuing a statement last week in which they claimed they had not accused Pacquiao of anything.

Weinstein resolved a dispute three years ago over the promotional rights to Pacquiao, who had signed contracts with Top Rank and Golden Boy.

Top Rank chairman Bob Arum, told ESPN.com: “This guy was successful resolving our nutty problem before and hopefully he can be successful this time. He’s a guy who is a big fight fan and loves the sport, and I found him last time to be a delight to deal with. Everybody did.”

Unbeaten Mayweather and five-weight champion Pacquaio – considered to be the best pound-for-pound boxers in the world – were set to meet at the MGM Grand Garden Arena in Las Vegas in the biggest fight since the turn of the century. 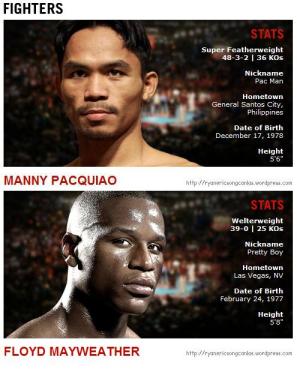